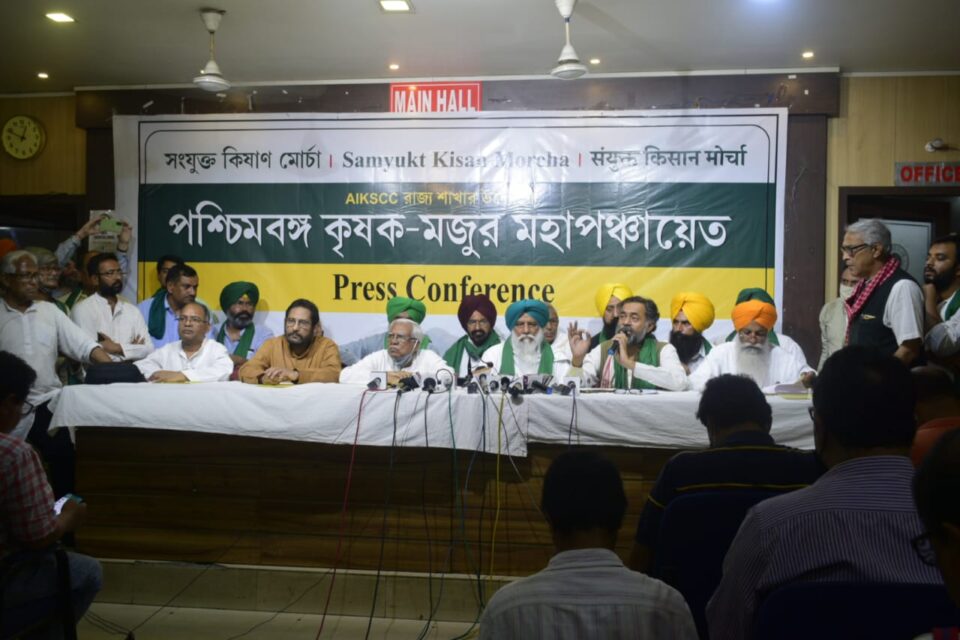 Senior Leadership of Farmers’ Protests at Delhi Arrive in Bengal; Call on Farmer of Bengal to Give “Vote Pe Choat” to Anti-Farmer BJP

Farmers of the Country Send a Message to Farmers of Bengal to Defeat BJP in Bengal Assembly Elections so that Modi Govt is Compelled to Accept Their Just Demands; Message to be Carried by 294 Kisan Doots to 294 Assembly Constituencies of State; Farmers Hold Massive Procession in City with Tractors and Plows; Huge West Bengal Kisan-Mazdoor Mahapanchayat held at Ramlila Maidan 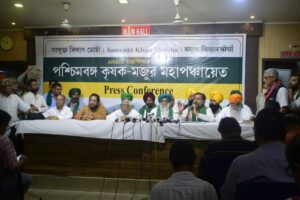 Kolkata, 12 March 2021(ATAL HIND ): Leaders of the Samyukt Kisan Morcha, a banner of agitating farmers’ organizations at Delhi, held a press conference at the Kolkata Press Club today. The leadership said that without the any demand from or consent of the farming community, the BJP Govt at the Center had brought in laws that would not only be detrimental to agriculture, but would destroy the entire peasantry in the country. The BJP leadership has repeatedly insulted the protesting farmers as brokers, extremists and anti-nationals. The BJP-led Central Govt has never had discussions with open mind to resolve the problem. Peacefully protesting farmers have been attacked with tear gas, water cannons and false cases on the instructions of BJP. These actions clearly show that BJP is fiercely anti-farmer. The BJP does not understand the difference between truth and lies, justice and injustice, good and evil and constitutional and unconstitutional acts. It understands only votes, seats and power. So Samyukt Kisan Morcha leadership called upon the farmers of Bengal not to vote for the BJP in the forthcoming Assembly elections in Bengal. The leaders clarified that they are not campaigning for any political party and farmers can vote for whomever they want but when voting, they hoped that farmers of Bengal would remember their appeal and not vote for BJP. BJP is desperate to win the Bengal elections and if the lose, their anti-farmer arrogance will be destroyed and the Modi Govt. will be forced to accept the demands of the agitating farmers. The leaders issued a letter from farmers of India requesting the farmers of Bengal not to vote for BJP and handed over the letter to 294 Kisan Doots at a ceremony held at Gandhi statue. The Kisan Doots shall take the letter to to 294 Assembly Constituencies in Bengal and the plan is to deliver this letter to all farmers of Bengal through relay system.

After the press conference, the leaders reached Ramlila Park at Moulali in a huge and spectacular procession of Tractors, Ploughs, Motorcycles and other Vehicles. The West Bengal Kisan-Mazdoor Mahapanchayat was held at Ramlila Park in the presence of thousands of farmers and farmworkers.

In the evening, the leaders had an interaction with intellectuals at the Khalsa High School at Bhawanipore.

Kisan Mahapanchayats will be held at Mayo Road, Bhawanipore and Nandigram on 13th March and Singur and Asansol on 14th March where all the above named leaders including Rakesh Singh Tikait and Yudhvir Singh shall be present.